Beyond Tellerrand in Düsseldorf, 2021 edition 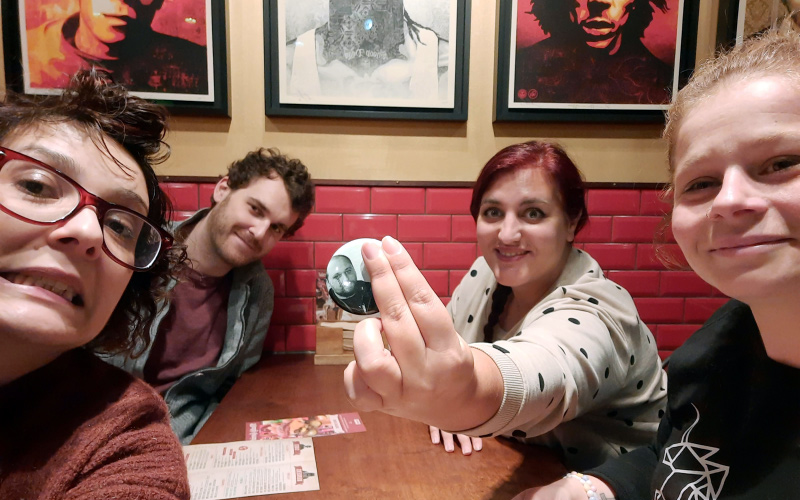 It is a Belgian developer, a Greek AI Specialist, a French writer and their friend UX designer who gather in Dusseldorf. Yep, sounds like a joke but actually, it’s a true story. The story of Daniel, Chrysanthi, Leeloo and I at Beyond Tellerrand, the place where humanity, creativity and technology meet. 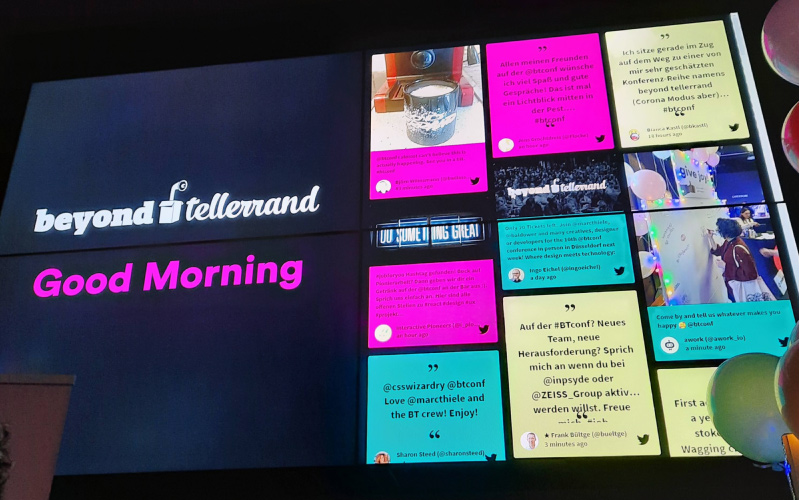 The last Beyond Tellerrand event took place in may 2019 in Düsseldorf. Since then, Covid happened and everything stopped. Usually, Marc Thiele can organize this huge event during one year. But this time, he received the authorization only a few months before. Marc has succeeded to gather speakers, partners, non-profit organisation, volunteers,… And once again, it was a total success.

It is not without a lot of emotion and some tears that Marc introduced the event Monday morning. 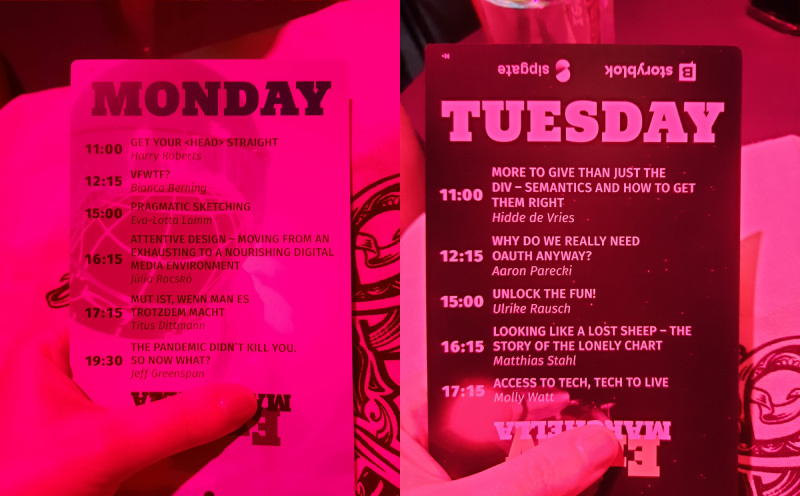 One thing that is awesome over there: you do not have to choose between talks. You can see everything if you want to.

Get your <head> straight, by Harry Roberts 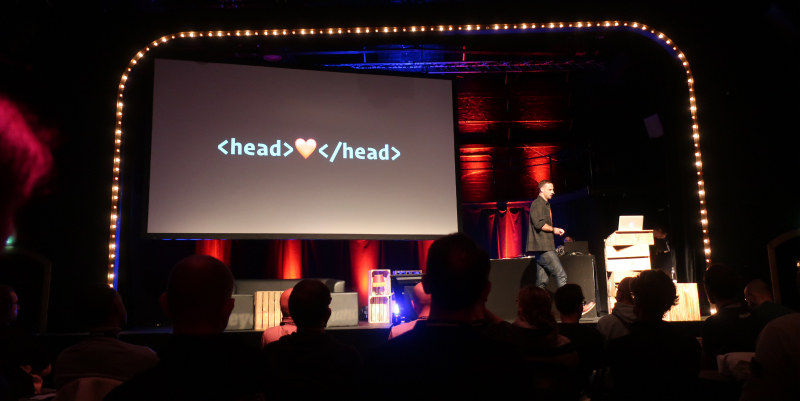 The art of taking correctly care of what is inside the <head> in a website. And also why! And I have to admit, Harry’s presentation was pretty convincing… 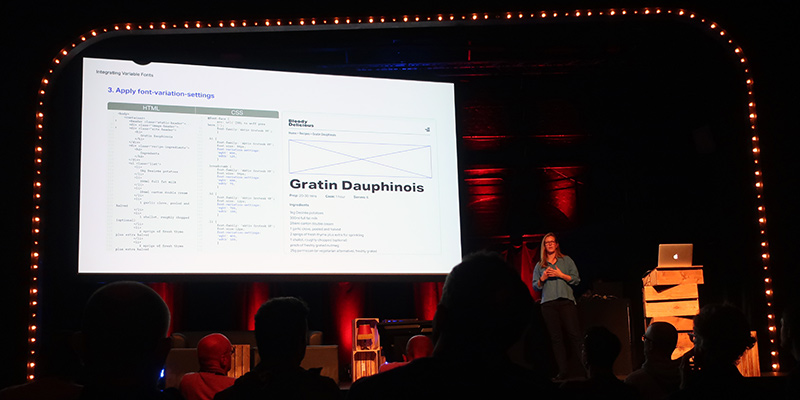 Variable Fonts, WTF? What are they? What are the variables? Weight, slant, italic, optical size, melt? What are their uses, like in dark mode, responsiveness, in AR, in data visualisation,… 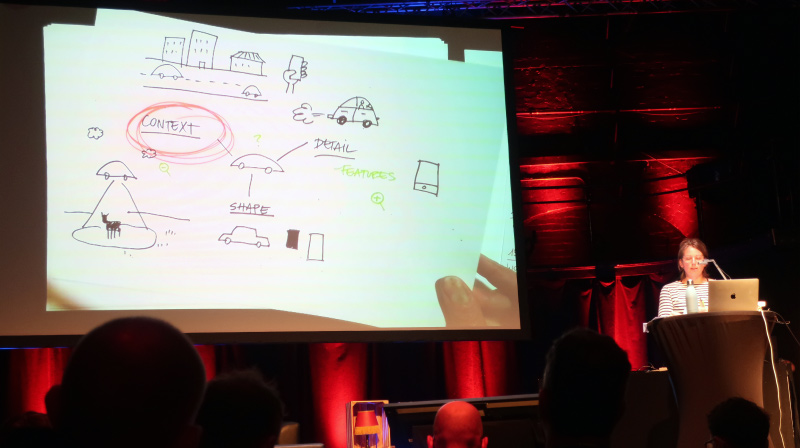 Eva-Lotta invited us to learn and to sketch at the same time as her. She showed and explained a lot of her techniques. I will definitely practice her tips everyday :)

Attentive Design - Moving from an exhausting to a nourishing digital media environment, by Júlia Racskó

There was a couple of great quote during this talk. Our sensibilities are used against us for profit and Our digital habits are counterproductive. By design. Júlia explained how, indeed, our digital environment is bad and negative for us. But like other speakers before her, she gave some leads to change that. A little bit of hope. 💛 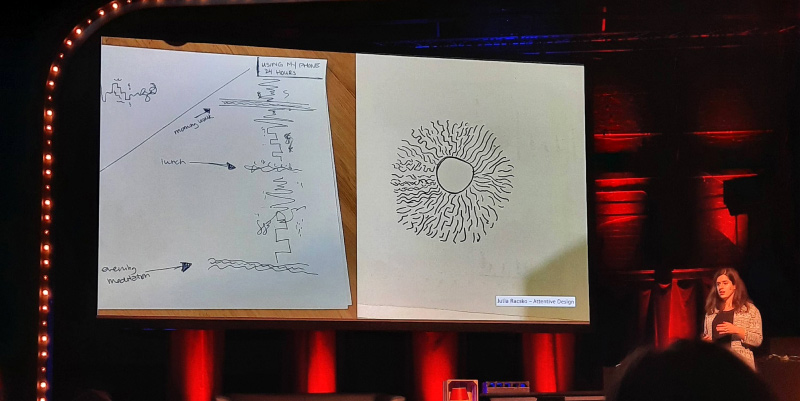 And what was super interesting for me as a super-emotive person who loves to draw, she showed us how she’s drawing emotions and feelings in a contextual drawing. And I was like “oh my god, maybe I can find a way to express myself, to explain with a drawing what I am experiencing”.
Because, like a looot of other people, last year was pretty much shit. I was diagnosed with a Panic Disorder.
And a year and a half later, I’m on a good way to be considered as healed. When I’ll be cured, I will still have to deal with my strong and intense emotions and some anxiety. It always has been difficult to talk about that. The result? Frustration.
Thanks to Júlia I may have an idea on how to express those feelings without words, using drawings. 💚 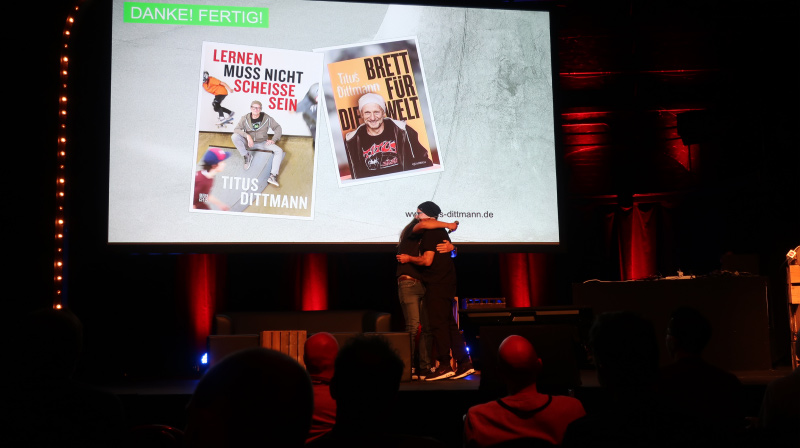 Titus began his talk in English to apologise about not doing the talk in English. During this first minutes, he said he was too old for it (almost 73 years-old), that he used to live in America, and then he talked about skates. Titus is a 72 years old guy considered as the “father of the German skateboard scene”. I understood he was a teacher, an entrepreneur and launched his foundation to help people.

For more, I will have to wait until the video of his talk is online and subtitled.

The pandemic didn’t kill you, so now what?, by Jeff Greenspan 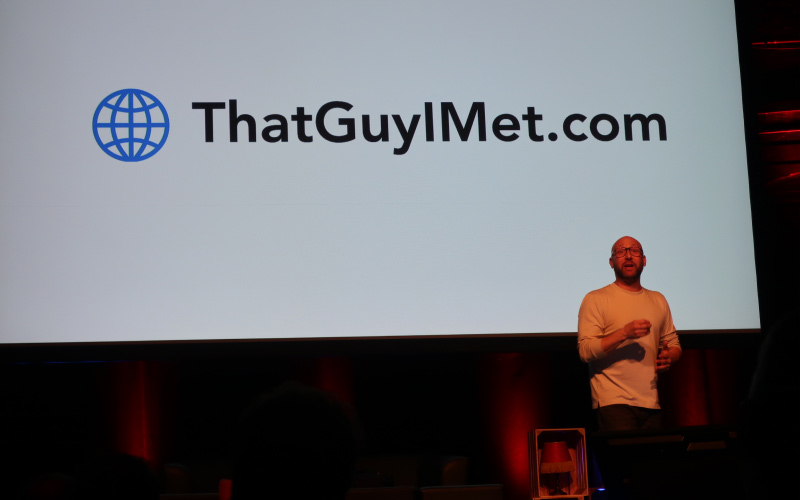 Jeff is a comedian and a writer and an activist. He used to live and work in New-York but with the pandemic, he moved in Tennessee to perform inside a hotel. He used the multiple constraints of the pandemic to find solutions and create a new way of living, working and having fun.

More to give than just the div - Semantics and how to get them right, Hidde de Vries 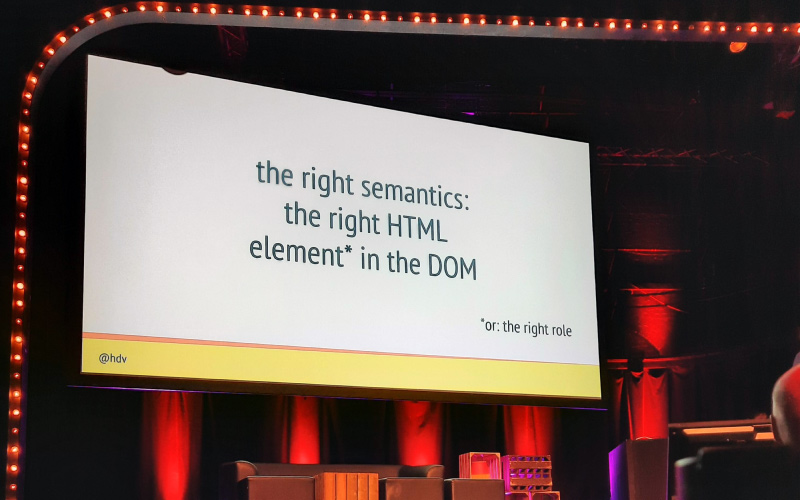 During more than 4 years, I was a webdev coach. I tried my best to teach my learners this basic concept: HTML is not a way to declare what stuff looks like on a page. And most of the time, my learners were like “yeah, whatever, it doesn’t matter”. And then, Hidde is saying that, indeed, majority of dev doesn’t give a shit about semantics and how to use correctly HTML. HTML seems simple but either dev are stupid (because they don’t use it correctly) or they are just doing it wrong.

Anyway, I was happy to see a talk about HTML and semantics and roles, and most of it why it’s important to respect some basic rules. Yeah baby, there is SEO and money but there is also accessibilty and users.

Why do we really need oauth anyway?, by Aaron Parecki 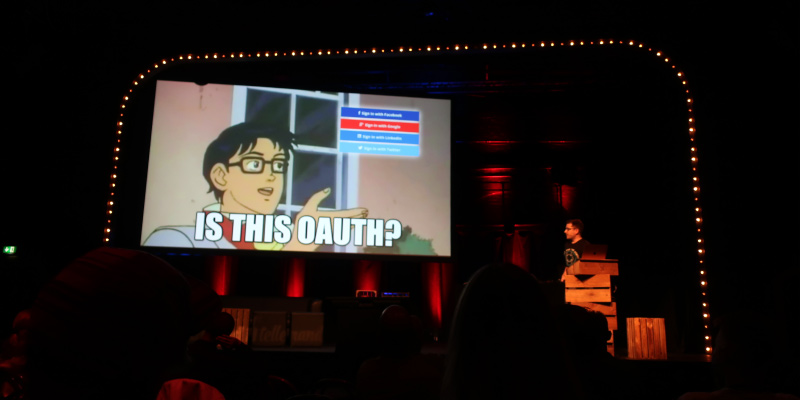 Ahahahah Aaron! Aaron made us laugh during a talk about Oauth! Many times! Now, I really understand what it is, how it’s working and why it is super usefull in many ways. Oauth is like an hotel access card. Brilliant. I really like when speakers talk about technical stuff but use common and daily things to explain them to everyone. It’s the “Explain me like I’m 5” method everyone should use all the time. Because no one is left behind, and because it’s fun.

Unlock the fun!, by Ulrike Tausch 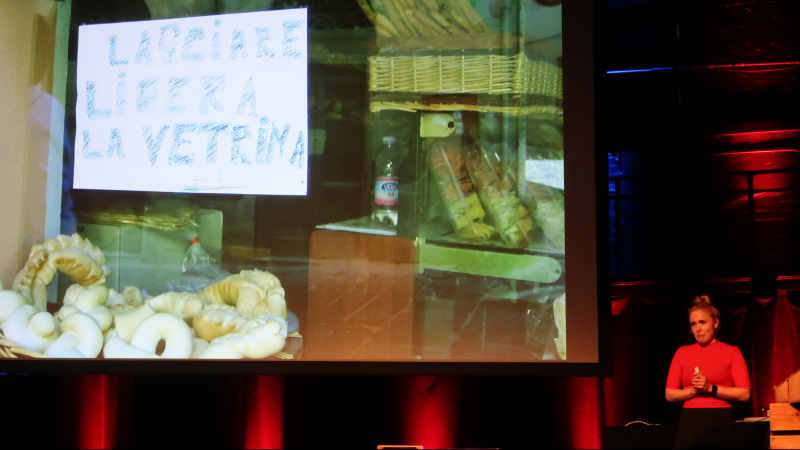 Ulrike is a very funny and expressive person. She’s full of joy and sparkles. She’s basically a human unicorn who really loves fonts. And she knows how to transmit this love. And it’s beautiful.

Plus, she’s a very talented font designer. She showed us several awesome features about fonts we had no idea they existed. Her talk completed perfectly Bianca’s one. I’m sorry but either I will make a list of everything, or I’ll you discover by yourself all the amazing things we can do with fonts nowadays.

Looking like a lost sheep - The story of the lonely chart, by Matthias Stahl 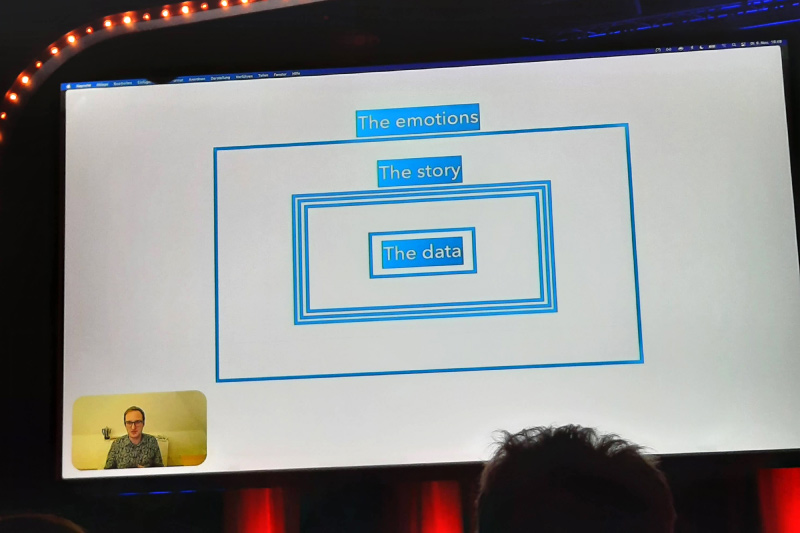 Matthias is a Data Scientist and Data Visualization Designer. He knows about data. And he’s working at The Spiegel. He knows how people read data. To make us understand, he showed us this quote:

“The more who die, the less we care” — Paul Slovic about psychic numbing

Then he showed us how he’s working, how he succeed to put faces, names, stories behind data. And seriously, it’s beautiful.

Access to tech, tech to live, by Molly Watt 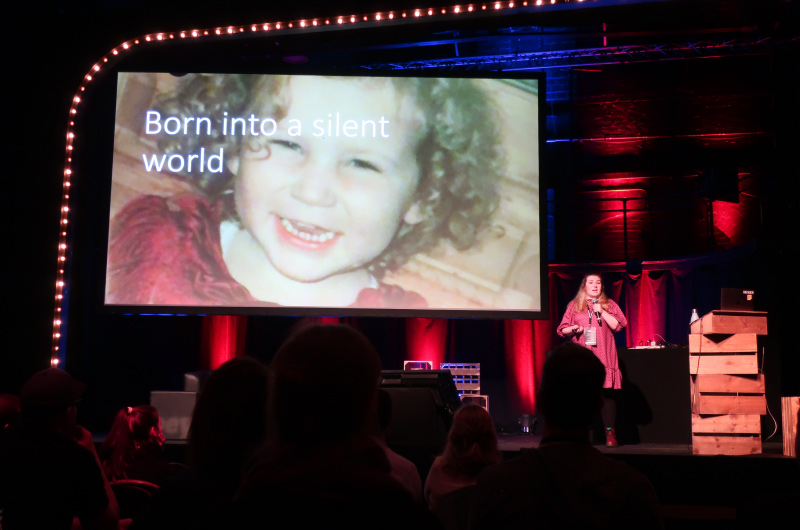 Molly was born deaf. And because her parents wanted her to feel a part of the world, they choose to teach her how to speak and not to use sign language. It worked. She went to school, had friends, but she eventually had some headaches. The doctor told her that the thing who prevent her to hear will soon prevent her to see as well. Molly has Usher Syndrome. 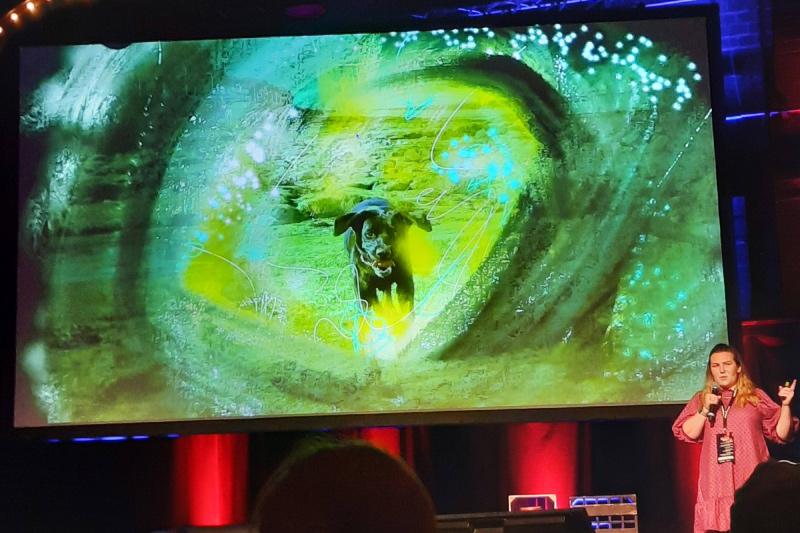 This is a picture Molly made to show people how she sees or doesn’t see. She reveals to us that people who are considered as blind usually are not like they are in a dark room without light. They can see stuff, have some glimpse.

She talked about how technology helps her on a daily basis to be independent and be a part of the world. She said a loooot of interesting things. That’s why everyone should watch her talk…

For me, it was the kick I needed. I just started a new job in a huge company, working on an already existing product. And I discovered that some feature used by impaired people needed some serious improvement. I made a lot of analysis, research, recommendations… But I feel this frustration: is it enough? How should I know if my remarks and my notes are relevant. I wanted to contact impaired people who are using the product to know their feelings, their remarks, to know their problems, to hear about their recommendations. I was shy, I didn’t know how to do it. Well, after Molly’s talk, I know that on Monday morning, the first email I will send will be to these person. I may not write my messages correctly but I’m still learning and at least I will try to reach them. I really really want them to test the product and tell me what we should do to improve it for them.

Yes, basically, Molly gave me the courage to do my work…

Rob Draper came at Beyond Tellerrand this time, not to make a talk, but to paint. He painted during two days some special demands and 100% of the money went to Makuyuni. 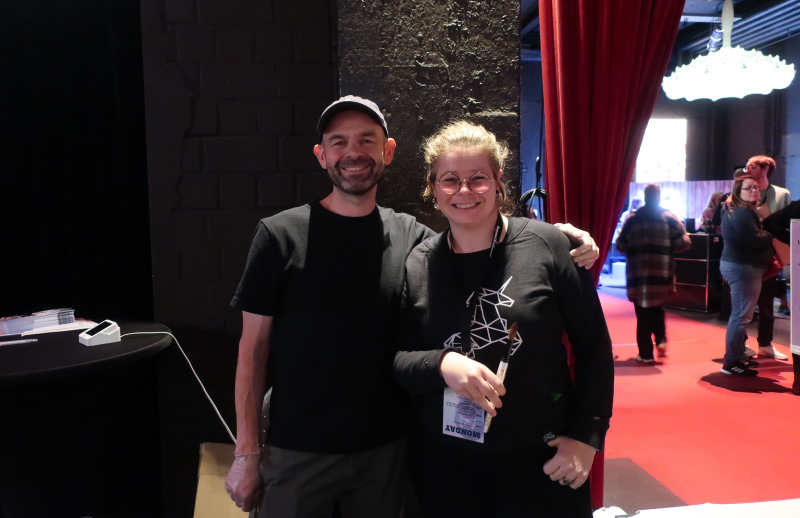 Speaking about Rob, he came in 2019 at Beyond Tellerrand. This year, my friend Leeloo was there and his talk blew her mind. A lot happened to her since this talk but in a nutshell, she quit her job, decided to follow her heart, to heal herself and to become a writer.

In 2021, while Rob was painting for Makuyuni, she said to him his talk in 2019 changed her life. She said she wanted to help the organisation but mostly she wanted something from his hand, a special painting for her: “Au fond du trou”.

“Au fond du trou” is the name of the book she wrote about her journey. How she was living a life that was destroying her day after day, how at some point she had to change something or she would die and how she was able to make these changes. A very difficult but necessary journey. A journey a lot of us experienced already or are about to take.

And so Rob painted a huge “Au fond du trou” for her. La boucle est enfin bouclée, as we say in French. 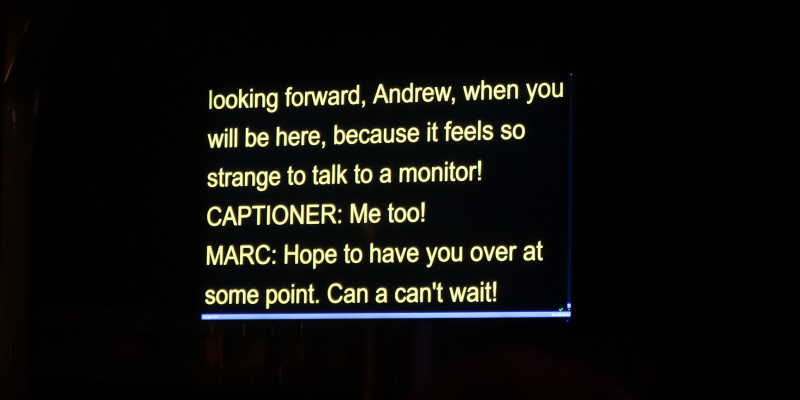 Every talk at Beyond Tellerrand are subtitled, simultaneously. Accessibility baby.

And behind the screen, there was Andrew. Marc Thiele never ever forget about the human aspect of everything. And of course he never forget Andrew was there, listening. So of course Marc had interactions with Andrew. It’s nice to remember that everywhere, things are done for humans by humans. 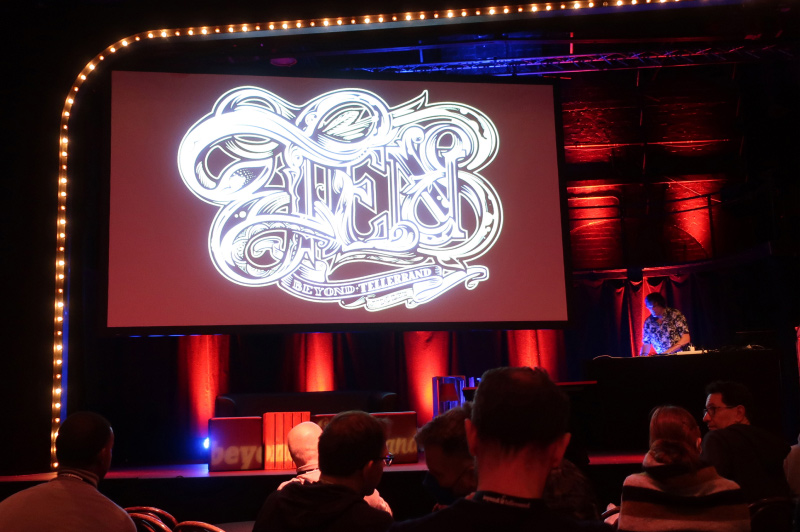 That guy knows who to make us dance. He has the fire. He’s mixing and dancing and singing and yelling at the same time! He’s living his music. And seriously, that’s part of the show. That’s a very important part of the event. It brings joy and dynamic. You can feel that Tobi (aka Baldower) loves what he’s doing. It’s contagious. It’s beautiful.

Watch this Baldower’s video, this gift to Marc Thiele. 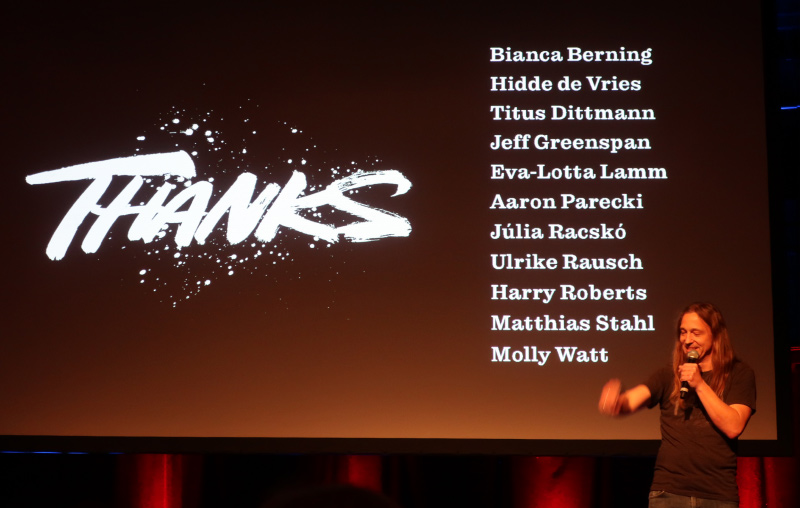 A lots of love on stage 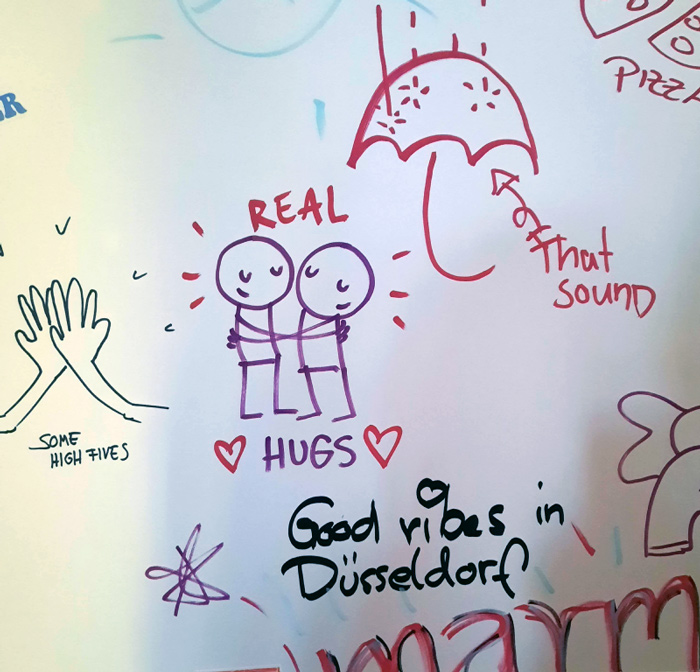 A lots of love in the audience. ^^ This is a picture of a glimpse of the wall on which we could write or draw on what makes us happy. 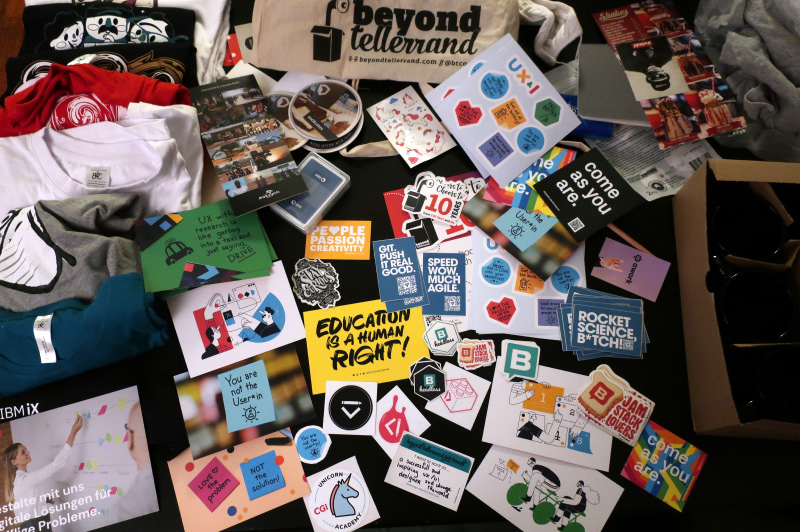 A loooot of bordel (as we say in French). I could not count everything but I bought 7 t-shirts I guess. Two were offered. I received 2 tote bags, lots of stickers, some pens, a mug (and I grabbed 5 others for my family and friends), two packets of vanilla pudding,… I will distribute everything amongs my family, friends and colleagues. I will make sure a little piece of Beyond Tellerrand is everywhere where I will be until the next edition.

A special thanks to Movify

As I told you earlier, I have a new job! And so far, I only had positive surprises. One of them is I have a training budget… You know what I mean, right? Yep, Movify sponsored my trip to Beyond Tellerrand! It’s so awesome to be encouraged to attend to such amazing event. It’s so empowering to be pushed for more knowledge, more skills, more networking, more solutions,… I mean, it’s not just a “do whatever you want”. It’s really a “Please go! Go! And tell us everything!” Thank you very much et gros gros gros bisous to the Team L&D 🫀